“Come my children, listen to me and I will teach you the fear of the Lord…  Keep your tongue from evil and your lips from speaking lies.  Turn from evil and do good; seek peace and pursue it.”
Psalm 34:11

I’ve titled this devotion, “Fear the Lord.”  There are a number of passages that talk about fearing the Lord, and how it’s important to fear the Lord.  In fact, I think those concepts that are repeated are the more important concepts.  If something is repeated a lot, we should make sure we’re doing that, right.

The expression, Fear the Lord’ is one of those concepts that’s repeated.  In Deuteronomy 6:1-2, right after God gave the Law in chapter 5, he gives the reason he gave the law in chapter 6, “these are my commands, decrees, and laws the Lord your God directed me to teach you to observe in the land that you are crossing the Jordan to possess, so that you, your children and their children after them may fear the Lord your God as long as you live…”  We don’t follow the Law any more, Jesus freed us from the bondage of the law and all that represented, but the idea of fearing the Lord is still important.

In 1 Peter 2:17, Peter is giving some instructions on how to live, and he says, “Live as free men, but do not use your freedom as a cover-up for evil; live as servants of God.  Show proper respect to everyone:  Love the brotherhood of believers, fear God, honor the king.”

The expression “Fear the Lord,” shows up 24 times.  If something is repeated 24 times, that must be really important, right?  And if that’s not enough, “Fear God” and “Fear of God” shows up an additional 21 times.  So the idea of fearing the Lord shows up 45 times – do you get the idea that it’s important.  That’s something we should be doing?

But here’s the thing, while there are a lot of verses telling us to fear the Lord, there aren’t a lot about what that looks like.  What does it mean to fear the Lord?  What do you do?  That’s what we really want to know, right?  If we’re going to fear the Lord, and we all want to, it’s important, so what do we do, what’s that look like, so I can do it.

There’s one other verse I want to share with you that talks about the Fear of the Lord, because I think it gives us an answer, and there aren’t many that do.  It’s Psalm 35:8-14..

1.  Keep your tongue from evil.  That the first part of verse 13.  What does it mean to keep your tongue from evil?  It means to watch what we say.  Say good things, things to build each other up, don’t say bad things, things tear each other down.  Ephesians 4:29 says, “Do not let any unwholesome talk come our of your mouths, but only what is helpful for building up others, according to their need, that it may benefit those who listen.”

James talks a lot about our words in chapter 2.  In verse 5, “The tongue is a small part of the body, but it makes great boasts.  V 6, “The tongue is like a fire, a world of evil among the parts of the body.  It corrupts the whole person, sets the whole course of his life on fire, and is itself set on fire.”  V. 8, No man can tame the tongue.  It is a restless evil, full of deadly poison.”  And finally in verse 9, he sums it up by saying, “With the tongue we praise our Lord and Father, and with it we curse men, who have been made in God’s likeness.  Out of the same mouth come paise and cursing.  My brothers, this should be not.”

To fear the Lord, we need to keep our tongue in check.  And we’re not showing a fear of the Lord, if we don’t.

2.  Keep your lips from speaking lies.  I don’t know about you, but if you’re anything like me, you hate it when people lie.  I hear it all the time, people lie.  Since I’m a pastor, they don’t really want me to know how their doing.  They really want me to know what they’ve been doing.  And if their caught, they certainly want to be judged by it.

But I’ll let you in on a little secret, God hates lying as much as you or I hate lying.  It was one of the 10 biggies, right, the 10 commandments.  Thou shalt not lie.  Colossians 3:9 says, “Do not lie to each other, since you have taken off your old self with it’s practices and have put on the new self, which is being renewed in knowledge in the image of its creator.”  In other words, we should lie, that’s what unbelievers do.  We live like Christ, and that means we’re honest.

Then in verse 22 he starts to tell us the good that we need to be doing – turn away from the evil and do good….  The good is the fruits of the Spirit:  “love, joy, peace, patience, kindness, goodness, faithfulness, gentleness and self-control.”

4.  Seek peace and pursue it.  Romans 12:18 says, “If it is possible, as far as it depends on you, live at peace with everyone.”  One of the beatitudes in Matthew 5 says, “Blessed are the peacemakers, for they will be called sons of God.”

“Come my children, listen to me and I will teach you the fear of the Lord…  Keep your tongue from evil and your lips from speaking lies.  Turn from evil and do good; seek peace and pursue it.”

The First Law of Motion 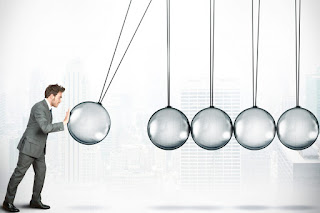 Sir Isaac Newton discovered, and later published, two Laws of Motion.  His first Law of Motion states that “a body at rest will remain at rest unless an outside force acts on it, and a body in motion at a constant velocity will remain in motion unless acted upon by an outside force.”  We all know that physical law, we can probably recite it, or at least paraphrase it.  We all know that an object in motion tends to stay in motion, and a body at rest tends to stay at rest.

If you’ve seen a rock on the ground, you’ve seen an example of this physical law.  If you watch it, you’ll notice that it will stay right where it is.  It is an object at rest and will stay that way until something acts on it, till something moves it.  If you kick it, you’ll see it will tend to go a long way, until friction and gravity bring it to a stop.  That’s a real basic example, but I think you get the basic premise.

This has some implications for the church.  Because now, in our post Covid-19 era, assuming the worst is over and this blip in the Delta variant will be short lived, our churches have seen more people staying home, and those who do go out, seem to be more content with just Sunday morning attendance than before.  Numbers are down, and this law seems to suggest they’ll stay slowed down until something happens to “get them in motion again.”

We saw the inverse when this pandemic started.  We were an active church, with a number of ministries going on, and a lot of participation.  We were a church in motion.  And the law states that we could expect to more or less stay in motion until something happened.  The something that happened was the pandemic.  We were forced to stay home for a few months.  We were forced to stop our activity, or at least dramatically reduce it, in the name of safety.

Now, we are a body at rest, and we need to start moving again.  Because if we don’t make the effort, the principal suggests that we will stay at rest until something happens.  What can be the motivator?  How can we begin to rebuild?  We can start by meeting together for dish-to-pass dinners.  Some don’t like the dish-to-pass format, so maybe we could have someone offer to do the main course, then someone to do sides, alternating among the people who come, at least for a while.  I don’t expect the number coming together would be too great, at least not as we get started.

Or we could come together for game nights, or movies, or going out to a restaurant together.  Anything that gets us out of the house, bringing us together as a church family, and promoting fellowship within that family, will do the trick.

So what do you think?  Are we ready to “get in motion” again?  What would you like to do?  What do you get excited about?  Let me know?