On Sunday, we started a new sermon series titled, Blessed Are You.  The first message in that series shares the name.  It's been posted to the Almond Union of Churches website, and can be seen by clicking the link below...

A Short Film on the topic of envy...

On Tuesday night, we finished our Book Study on Rick Warren's book, The Purpose Driven Life.

As I had stated when we started, the book has been re-released under the title, What On Earth Am I Here For?" and now includes two new chapters, one on envy, and one on people pleasing.  Both are excellent chapters, and we spent a lot of time discussing both of them.

That was a rather long lead in to a fairly short video that I think really drives home the point...  Notice when the boy with old, worn out shoes cries out, "It isn't fair, I wish I could be like him..."

We've all struggled with envy.  But remember that we have no idea how much the other person has sacrificed to get what they have.  Maybe we aren't willing to sacrifice that much...
at August 22, 2013 No comments:

Made For a Mission...

Sunday's message has been posted on line.  This was the last of Rick Warren's five purposes for our creation.  We were made for a purpose.  Check out this week's message below:

There's even an audio link if you would like to listen.
at August 20, 2013 No comments:

I found the following article from the Huntington Post:

In Herriman, Utah, single adults ages 18 to 30 form their own ward in the Church of Jesus Christ of Latter-day Saints. In Washington, a synagogue offers "Drinks and Drash" gatherings where participants in their 20s and 30s gather at a local restaurant for study sessions.

In Scotch Plains, N.J., a ministry experiment in an Assemblies of God congregation has become its own church within a church for young adults.

As fewer young people fill the pews of houses of worship, some congregations are trying innovative ways to halt the exodus of young adults from organized religion.

But it is a massive challenge. Young adults today are more likely to claim no religious affiliation, and less likely to attend worship. The average age of worshipers is 54, or 10 years older than the average American, according to the 2008-2009 U.S. Congregational Life Survey.

So what does work when it comes to attracting young adults?

A new report analyzing the 2010 Faith Communities Today study of more than 11,000 congregations provides insights into what makes congregations with significant numbers of young adults distinctive. The profile by researchers Monte Sahlin of the Cooperative Congregational Studies Partnership and David Roozen of the Hartford Institute for Religion Research explores the characteristics of the mere 16 percent of those congregations where 21 percent or more of participants are ages 18 to 34.

Here are some of the report's key findings:

The KISS principle: Keep it spiritual, stupid: Congregations reporting high levels of spiritual vitality were three times as likely to have significant numbers of young adults as congregations with low spiritual vitality. "What they are looking for is something that touches them," Sahlin said of young adults. "They're looking for something that connects to the divine in a palpable way."

Keeping up with new technology: Congregations that reported multiples uses of technology such as social media and websites were twice as likely to have a significant percentage of young adults as those that reported marginal use.

Electric guitars rock: Congregations that used electric guitars and overhead projectors in their worship often or always were about twice as likely as congregations who never used them to have significant young adult participation.

Gender balance: While women outnumber men in most congregations, the study found the more men there were in a congregation the more likely it was to attract young adults.

Promoting young adult ministry: Congregations that placed a lot of emphasis on young adult activities and programs were more likely to attract young women and men.

In many ways, young adults are attracted to what matters most to believers of any age: Being part of a congregation that recognizes and meets their spiritual needs.

In looking at communities that were successful in attracting young men and women, "It's pretty clear that these were congregations that were, No. 1, intentional about engaging young adults," Sahlin said.

But with the aging of many congregations, incorporating changes from adding electric guitars at worship to integrating young adults into leadership positions becomes even more imposing.

"The church has to go through a process of change," Sahlin said. "That has been difficult every step of the way."

For faith communities who may have given up hope, however, the study provides some encouragement. Fulfill the spiritual needs of believers in their 20s and 30s, and they will come.
at August 15, 2013 No comments:

In our readings in the Purpose Driven Life by Rick Warren, he passes along John Wesley's motto in life...

This week’s message is the sixth in our series, What on Earth Am I Here For?  We’ve been looking at our purposes for being here, as found in Rick Warren’s Purpose Driven Life book.  This week is our forth purpose, we are Shaped to Serve, one of our purposes for being created is to serve God.  We see how to serve God, what that really means, and we see some things about Jesus that models this service to God.
To read this message, click here. Thanks for reading!
at August 13, 2013 No comments:

God Wants you to Grow Up


Your heavenly Father’s goal is for you to mature and develop the characteristics of Jesus Christ.  Sadly, millions of Christians grow older but never grow up.  They are stuck in perpetual spiritual infancy, remaining in diapers and booties.  The reason is that they never intended to grow.

Spiritual growth is not automatic.  It takes an intentional commitment.  You must want to grow, decide to grow, make an effort to grow, and persist in growing.  Discipleship – the process of becoming like Christ – always begins with a decision.  Jesus calls us, and we respond:  “‘Come, be my disciple,’ Jesus said to him.  So Matthew got up and followed him.”

- Rick Warren
The Purpose Driven Church
at August 12, 2013 No comments:

You need to be part of a church…


In many religions, the people considered to be the most spiritually mature and holy are those who isolate themselves from others in mountaintop monasteries, uninfected by contact with other people.  But this is a gross misunderstanding.  Spiritual maturity is not a solitary, individual pursuit!  You cannot grow to Christlikeness in isolation.  You must be around other people and interact with them.  You need to be a part of a church and community.  Why?  Because true spiritual maturity is all about learning to love like Jesus, and you can’t practice being like Jesus without being in relationship with other people.  Remember, it’s all about love – loving God and loving others.
- Rick Warren
The Purpose Driven Church
at August 09, 2013 No comments:

We've been looking at the Purpose Driven Life by Rick Warren, both in our Sunday messages, and in a Tuesday Book Study.  It's been going very well, and I wanted to share some things from the book over the next couple of days.

The first purpose we have is that we are planned for God's pleasure.  Our purpose is to make God happy, and essentially, since God made us to love us, then loving Him back makes Him happy.  Rick Warren looked at the life of Noah to see what Noah did that made God happy, after all, Genesis 6:8 says, "But Noah found favor in the eyes of the Lord." 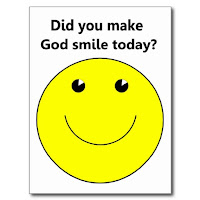 God smiles when we love him supremely.  Noah loved God more than anything else in the world, even when no one else did!  The Bible tells us that for his entire life, "Noah consistently followed God's will and enjoyed a close relationship with Him" (Genesis 6:9).

God smiles when we trust him completely.  The second reason Noah pleased God was that he trusted God, even when it didn't make sense.  The Bible says, "It was faith that Noah built an ark to save his family from the flood.  He obeyed God, who warned him about something that had never happened before.  By his faith... he was made right in God's sight." (Hebrews 11:7)

God smiles when we obey him wholeheartedly.  Saving the animal population from a worldwide flood required great attention to logistics and details.  Everything had to be done just as God had prescribed it.  God didn't say, "Build any old boat you'd like, Noah."  He gave very detailed instructions as to the size, shape, and materials of the ark as well as the different numbers of animals to be brought on board.  The Bible tells us Noah's response:  "So Noah did everything exactly as God had commanded him" (Genesis 6:22).

God smiles when we praise and thank him continually.  Few things feel better than receiving heartfelt praise and appreciation from someone else.  God loves it, too.  He smiles when we express our adoration and gratitude to him.

God smiles when we use our abilities.  After the flood, God gave Noah these three simple instructions:  "Be fruitful and increase in number and fill the earth...  Everything that lives and moves will be food for you.  Just as I gave you the green plants, I know give you everything" (Genesis 9:1,3).  God enjoys watching every detail of your life, whether you are working playing, resting, or eating.  You don't bring glory or pleasure to God by hiding your abilities or trying to be someone else.

So how about you?  Are you making God smile?  It's one of your primary purposes for being alive.

From The Purpose Driven Life,
by Rick Warren
at August 08, 2013 No comments:

This past Sunday we looked at the 3rd purpose of our life from Rick Warren's Purpose Driven Life – You were Created to Become Like Christ. God’s plan has always been to make you like Jesus Christ. Once you are in God’s family He wants you to take on the family likeness. He wants you to become like His Son – like Father, like son. You’ll never be a god. But God does want you to become godly.

The process of becoming like Christ is called discipleship.  It's a life long process in the life of a believer.  And it's an important process.  This life is just a preparation for the next life, in heaven, with God.  God's purpose is to prepare us for that life.  He does that by slowly changing us to become more and more like Jesus.  We even talk about some of the ways God builds us and grows us into the image of Christ.

If you want to see the message now,  click here.  There's even an audio link if you would rather listen to it!
at August 07, 2013 No comments: