This Sunday at Almond Union of Churches, we're continuing our series on the Christmas Classics.  This week is Rudolph the Red Nosed Reindeer, and look to see how we can light our way this Christmas Season.  Just to get you in the mood, check out the video...
at December 19, 2012 No comments:

A Response to Sandy Hook... 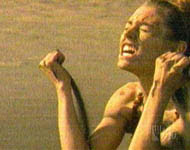 Several times in my ministry we have faced tragedy in our nation.  Perhaps the first was in 1999 with the school shooting in Columbine High School.  I wasn’t here in Almond yet, but that was something that shook the country.  How could a student be so angry, so hateful, so out of control, that he would take a gun to school and shoot his fellow students.

In 2007, On the campus of Viginia Tech, we saw the most gruesome and deadly of these school shootings, when student brought a gun to class and killed 33.  And again, we asked the question, How could a student be so angry, so hateful, so out of control, that he would take a gun to school and shoot his fellow students.

This year, in Aurora Colorado, James Holmes opens fire in a crowded movie theater, killing 14, and injuring over 50.

Even more recently, a gunman opens fire in a busy shopping mall in the Portland Oregon area.

And then yesterday.  The shooting at the Sandy Hook Elementary School in Newtown, CT.  And we have to ask the question again, How can a person be so angry, so hateful, so out of control, that he would take a gun to school and shoot that many kids.  I don’t know about you, but I have to ask why?  What it is that has got this man so angry, so frustrated, so hopeless, that this mass shooting sounded like his best course of action.

Of all of these shootings, I think yesterdays was the worst.  Why was this one harder to accept, not that any are easy to accept.  Perhaps it was because this one wasn’t a student, he came onto campus from the outside.  He didn’t belong there.  Perhaps it was because the students were so young, this was an elementary school – the victims were all under 10, the majority in first grade, that would make them just 6 or so.

Why?  Why do we keep seeing this kind of evil?  Why does God allow this evil to happen.  Do you ask yourself these questions?  I do.

And while I won’t go into any possible answers, I will say, that when I see this evil, I’m reminded of something going on around us that’s bigger than us.  I’m reminded that this is a fallen world, and we’re all fallen people.  God’s forgiveness is available to any who humble themselves and seek God, but we’re fallen people in a fallen world.

And I’m reminded that there is evil in this world.  And that we can’t navigate this world without help.  God’s help.  We need Him.  Because we’re fallen.  We need a Savior.