I came across this story and thought it was an excellent reminder that we can be very quick to judge... 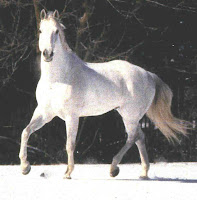 There was an old man in a village, very poor, but even the kings were jealous of him because he had a beautiful white horse.  Kings offered fabulous prices for the horse, but the man would say, “This horse is not a horse to me, he is a person.  And how can you sell a person, a friend?”  The man was very poor, but he never sold the horse.  One morning, he found that the horse was not in the stable.  The whole village gathered and said, “You foolish old man!  We knew that someday the horse would be stolen.  It would have been better to sell it.  What a misfortune!”

The old man said, “Don’t go so far as to say that.  Simply say that the horse is not in the stable.  This is the fact; everything else is a judgment.  Whether it is a misfortune or a blessing I do not know, because this is just a fragment.  Who knows what is going to follow it?”

People laughed at the old man.  They had always known that he was a little crazy.  But after fifteen days, suddenly one night the horse returned.  He had not been stolen, he had escaped into the wild.  And not only that, he brought a dozen wild horses back with him.  Again the people gathered and they said, “Old man, you were right.  This was not a misfortune, it has indeed proved to be a blessing.”  The old man said, “Again you are going to far.  Just say the horse is back, who knows whether it is a blessing or not?  It is only a fragment.  You read a single word in a sentence – how can you judge the whole book?”

This time the people did not say much, but inside they knew that he was wrong.  Twelve beautiful horses had come…  Of course it was a blessing!

The old man had an only son who started to train the wild horses.  Just a week later he fell from a horse and both his legs were broken.  The people gathered again and again they judged.  They said, “Again, you proved right!  It was a misfortune.  You only son has lost the use of his legs, and in your old age he was your only support.  Now you are poorer than ever.”

The old man said, “You are obsessed with judgment.  Don’t go that far.  Say only that my son has broken his legs.  Nobody knows whether this is a misfortune or a blessing.  Life comes in fragments and more is never given to you.”

It happened that after a few weeks the country went to war, and all the young men of the town were forcibly taken for the military.  Only the old man’s son was left, because he was crippled.  The whole town was crying and weeping, because it was a losing fight, and they knew most of the young people would never come back.  They came to the old man and they said, “You were right, old man, this has proved to be a blessing.  Maybe your son is crippled, but he is still with you.  Our sons are gone forever.”

The man said again, “You go on and on judging.  Nobody knows!  Only say this, that your sons have been forced to enter into the army, and my son has not been forced.  But only God knows whether it is a blessing or a misfortune.”

“Judge ye not” – otherwise you will never become one with God.  With fragments you will be obsessed, with small things you jump to conclusions.  Once you judge you have stopped growing.

Judgment means a stale state of mind.  And mind always wants judgment, because to be in process is always hazardous and uncomfortable.  In fact, the journey never ends.  One path ends, another begins.  One door closes, another opens.  You reach a peak, a higher peak is always there.  God is an endless journey.  Only those who are so courageous that they don’t bother about the goal but are content with the journey, content just to live the moment and grow into it, only those are able to walk with God.